Sony has introduced the Sony A8H OLED screen, which is the best OLED screen from Sony, with a design, slim edges and a distinctive display experience in OLED screens. 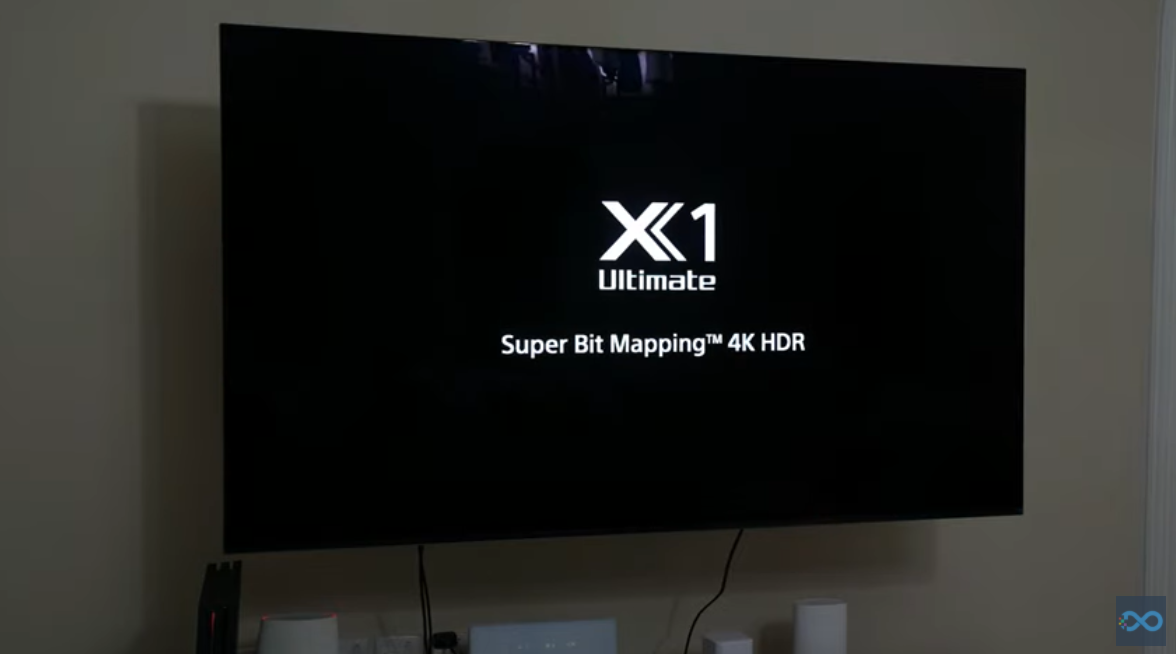 Sony brings together in the Sony A8H OLED screen a set of the best technologies that support the user with a distinctive viewing experience, as the screen comes with 4K resolution, with better image processing thanks to the X1 Ultimate processor that supports data analysis with higher accuracy, so it will provide the user with a vibrant viewing experience, with natural colors And with higher color accuracy, in fact.

The X1 Ultimate processor also works to adjust the screen in color sharpness, and acoustics quality, and also supports the screen in areas of darkness and brightness optimally.

The screen supports many technologies that include Dolby Vision technology, HDR technology that comes with the highest image quality with a smooth frame display, and the screen also includes X-Motion Clarity technology that will support higher image clarity with fast frame movement and less blur.

The screen is generally characterized by an elegant design, as this design supports the slim size of the screen, and it also supports installation on a stand or a wall directly. 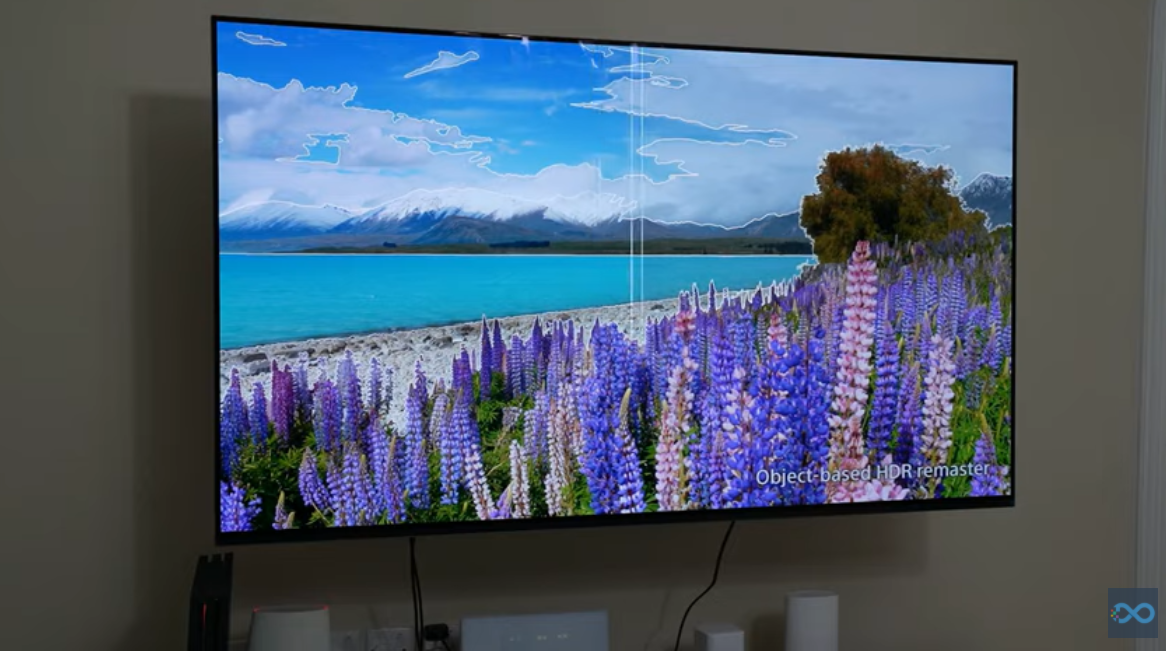 The screen also supports ACOUSTIC acoustics, which is one of the best technologies presented in the market of the screens, as it differs from the screens that come with an amplifier on the back or at the bottom of the screen, which often comes at an acceptable level in the quality of the acoustics, as ACOUSTIC technology allows the emission of acoustics from The screen via audio channels supported by two audio amplifiers, an integrated design to support the user with an amazing sound experience in the screen that distributes acoustics around the room with the highest efficiency and in different directions.

Also, in addition to the ideal distribution of acoustics in the Sony A8H OLED screen, the acoustics emitted from the screen are also of the highest quality, so ACOUSTIC technology will support you with the best audio experience that surpasses many of the amplifiers provided in this category of screens.

Also, the efficiency of the processor can be noticed in HDR technology in particular, with brightness and darkness areas shown in the screen at the highest efficiency, the screen also provided the best performance in movement and frame speed.

In the Sony A8H OLED screen experience in Playstation games, X box, and also in PC games, the screen presented a distinctive experience by adjusting the screen through settings and adjusting the image to the pattern designated for games, as this mode can provide a faster response time and less input delay. To 18 fractions of a second with the traditional display quality and also 4K HDR resolution, which also provided a fast response at 18 fraction of a second or 18.7 seconds. 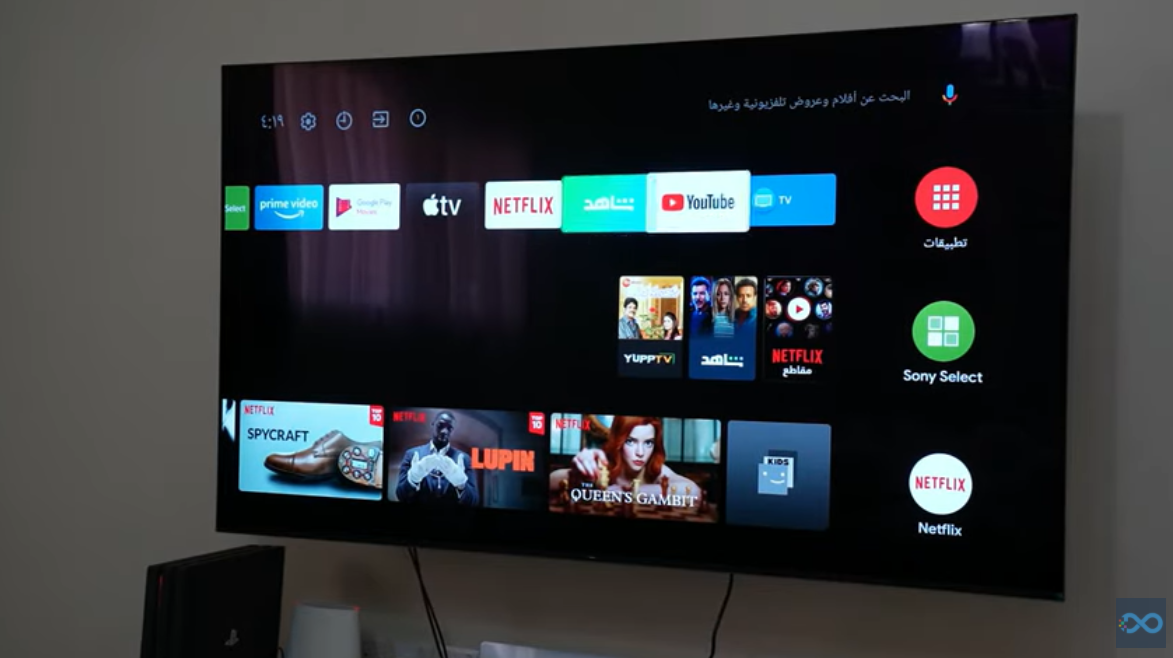 The Sony A8H OLED device features a Google TV system that supports the user with an endless number of various applications. The user will also be able to download new applications via the Google Play Store, and the application list provides a seamless experience for browsing and searching for applications installed on the screen.

On the other hand, the Google TV interface is characterized by a clear experience that supports the user in quick search for applications, as well as managing and coordinating applications in the user’s preferred manner, and many content-streaming services are available from YouTube, netflix, watch and other content streaming services.

The system interface also provides a dedicated window for alerts, which will support clear and coordinated display of alerts, and the user will also be able to control the system interface via the remote control or via voice commands for the control device, where the user can, through this feature, launch and run an application or broadcast service, With full support for voice commands in Arabic. 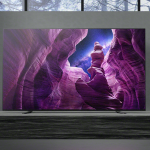 The Sony A8H OLED screen is one of the best OLED screens from Sony, with a slim and elegant design, support for many technologies and 4K resolution, with distinctive ACOUSTIC audio technology, Google TV system, and also support for APPLE AIRPLAY technology, and the X1 Ultimate processor also supports the screen with the best performance in All technology for the best experience, with exclusive gaming style.