Orange Slovakia revealed the price at which the Galaxy S20 FE will be launched soon to the market, as Samsung offers the phone at a price of 700 euros.

Samsung decided on September 23 for the official announcement of the Galaxy S20 FE, and today the phone was monitored in the lists of Orange Slovakia, which reviewed the specifications of the phone and the price that will soon be launched to the market. 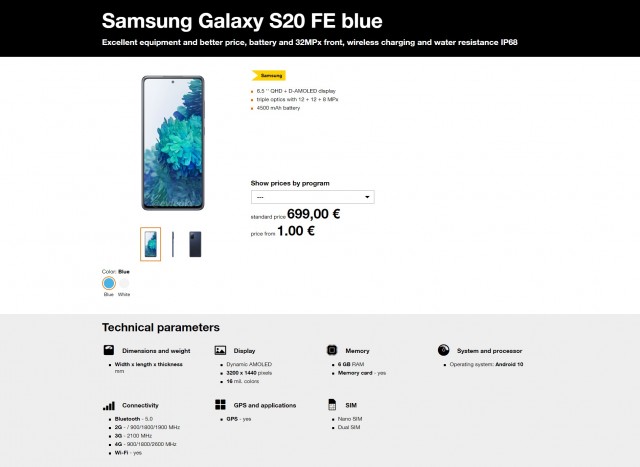 The leaks indicate that the Galaxy S20 FE comes in two models, where the first model supports 4G networks and includes the Exynos 990 processor, while the other model comes with the advantage of connecting to 5G networks with a Snapdragon 865 processor chip.

On the other hand, the phone page on the Orange Slovakia website indicates that the Galaxy S20 FE has a resolution of 1440 pixels plus, it also comes with a 6.5-inch Dynamic AMOLED screen, with triple settings for the rear camera, which includes two 12 mega pixel sensors and an 8 mega pixel sensor.

The Galaxy S20 FE also supports IP68 standards, and has a 4,500 mAh battery, so we await the official announcement on September 23 to confirm these details about the phone’s price.

Huawei wants to impose restrictions on the Nvidia and Arm deal